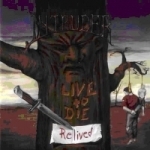 It’s always great to see re-issues that are done with class and dedication, especially nowadays when there’s so many cheaply done bootlegs of 80s Metal classics flooding the market. Luckily INTRUDER’s excellent, yet very hard to find debut offering "Live To Die" (which originally came out on the small but fine cult label Azra / Iron Works Records) is an exception to the rule. In terms of the packaging it can easily compete with all the great High Vaultage releases. Which means, there’s a highly impressive, fat booklet (20 pages!), featuring all of the lyrics, lots of classic photoshoots, liner-notes, additional info, lyrics and so on, PLUS six bonus tracks (7 on the vinyl version), taken from the band’s 1984 and 1986 demos, when the guys were still called TRANSGRESSER (no spelling error here…). Except for ‘Nightshift’, which remained unreleased on an album so far, all of the tunes also ended up on the INTRUDER debut "Live To Die" (‘Victory In Disguise’ with different lyrics though). The sound quality on these tapes is extremely good, especially if you take into consideration WHEN they were originally recorded and that the 1984 material was done on a cheap 8-track only! Musically there’s no big differences to the album versions, apart from the fact that the material became more matured and heavier sounding in the years to follow. Back in their early days, INTRUDER were definitely a pure Power / Speed Metal band, rather than the Thrash unit they evolved into on their next releases. While METALLICA used to draw influences from the NWOBHM movement and mixed that with the aggression of Punk, INTRUDER obviously took a different, yet similar musical path. To me it seems that the Nashville bunch simply took the speedy NWOBHM songs to the next level, meaning they developed them into something even faster and more powerful, still maintaining their traditional Metal roots though. Singer James Hamilton has a clear, charismatic voice, and every now and then pretty much sounds like the aggressive brother of Klaus Meine in his heydays. Certainly not everyone’s taste, but more unique than the majority of vocalists around (past and present). For some strange reason I always enjoyed "Live To Die" (now re-named "Live To Die… Relived") the most out of all the band’s releases (even though it’s the most immature for sure), probably because it became such a cult record for many of the people I used to hang out with at the time (and they constantly played it, especially the awesome ‘Kiss Of Death’!). It certainly brings back great memories! A really cool idea also is the coverart for this re-release, which is based on the original black and white artwork. If you can’t find the CD in your area, contact www.hellionrecords.de directly. They sell it for 15,50 Euro. It is also And don’t miss the band at this year’s Headbanger’s Open Air on July 09 / 10 in Brande-Hörnerkirchen, Germany.