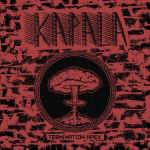 It is not often that we come across Metal from India, for some strange reasons. I guess a country with that size and such a population count should be able to produce a killing Metal band or 120… KAPALA hails from India and delivers Black noisy and raw War Metal. This is the band’s second EP, and their second release on the German label Dunkelheit Produktionen as well, the first EP "Infest Cesspool" was released a couple of years ago. After the lengthy and ‘after the apocalypse’ sounding intro, the trio blasts off with raw power and noise, I guess some of the inspiration has been found in Canada amongst the cult of Yabssor. The production is grim, lo-fi and noisy, letting some of the guitar riffing, chaotic drumming and noisy vocals through once in a while. The music is heavy and blasting, actually quite varied pace and weight-wise. This is a powerful output for all fans of War Metal and chaotic noisy and raw Black Metal. There isn’t that much new over the output, though the music is delivered with sheer intensity and dedication! Follow the burst command til war at: www.facebook.com/kapala666, www.dunkelheit-produktionen.de