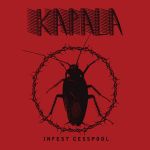 This one goes out to those of you who even think that Lo-Fi still sounds too good and commercial and only accept No-Fi productions. KAPALA from Kolkota, India, just released their first musical assault, an EP called “Infest Cesspool”. And it will be a dream for anyone who thinks that SODOM sounded too commercial ever since they signed their first record deal. This EP seems to have been recorded in a practice room with KAPALA practising their songs next door. It’s hard to recognize a guitar riff in all this noise, let alone a harmony line or anything else. I can’t even tell if KAPALA has potential. Would this have been a demo tape recorded around 1985, it might have a certain charm. But a Black (or something similar) Metal CD released in 2017? No way, Sir! Masochists visit www.facebook.com/kapala666 or www.dunkelheit-produktionen.de