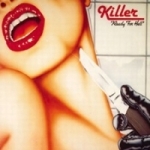 Whose band name was better associated with Mausoleum back then than KILLER? None! Through the course of three albums, this Belgium powerhouse act forged their name into Metal history. Starting with the ’79 album "Ready For Hell" (coupled with "Wall Of Sound" here), where KILLER were nothing more than a very average Heavy Rock outfit (the title track being the only real intense fast paced heavy number), offering at times very awful stuff like ‘Rock’n’Roll Fan’ or ‘Laws Are Made To Break’ (two cheesy Rock’n’Roll tunes). Things really started with the second album "Wall Of Sound" as the title track puts you in condition right away (not surprising considering the little variation between it and "Ready For Hell" ), a scorcher. But while many compared them to MOTÖRHEAD (too easy of a comparison), I would say KILLER were more like a faster version of THE RODS as some tracks sounded like they could have been at the right place on a RODS album (‘Battle Scars’, ‘Bodies And Bones’…). This second album was a real heavy fucker from start to finish. As a bonus you get the medley ‘Wall Of Hell’ (no need to add more huh?!). With "Shock Waves" things just could be faster and heavier (a natural progression back then that the hungry Metallers were looking for) and it was somewhat the case as this album while not being as mindblowing as "Power Games" or "This Means War" still gives you a run for your money. ‘Shock Waves’, ‘In The Name Of The Law’, ‘Scarecrow’, ‘Ritcher Scale 12′ etc… all raged furiously. As bonus, four tracks from the unrealeased "Alive In Eighty Five" album appear here they’re all that survived from this live recording (a shame considering the fury of that particular night!), just for that you must get this album! "Fatal Attraction" marked the comeback of the Belgium killers, this time as a four piece (Shorty sharing the guitar parts) and while I never dared to check it out in 1990, it appears to be a fuckin’ good and surprising album as NONE of the original power was sacrificed for newer sounds or bullshit like that! No no, it’s still KILLER here faster and heavier making their way through ragers like the title track, ‘Break Down The Wall’, ‘Kick In Your Ass’, ‘Highway Killers’ etc. It’s clear that everything wasn’t perfect as there was a couple of fillers (just like in the past in fact) but Shorty and Spooky were back with a vengeance. As bonus, four tracks from the VAN CAMP (Shorty’s real name) solo album are added, the material being very KILLER-like but it didn’t really have the quality of the KILLER albums, some arrangements being cheap. Still it was good to see Double Bear reunited with Shorty on this album. All CD’s come again with detailed booklets and a bunch of photos. Excellent.