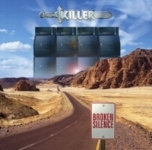 Thirteen years after the original release of KILLER’s latest album “Fatal Attraction”, one of Belgium’s premier Metal acts finally returns to the scene with a brandnew release. Well, actually it’s just vocalist / guitarist Paul “Shorty” Van Camp with a completely renewed backing band, but that doesn’t necessarily mean that the new material ain’t recognizable as KILLER any longer (even his VAN CAMP solo album still pretty much sounded like KILLER). Shorty’s vocals are simply too unique and his way of writing songs still too typical. So, the main difference between “Broken Silence” and all the older KILLER releases is mainly the addition of keyboard player Dave Powell, a fact which may sound weird in the first place, in particular to all those of you who still remember the band’s full force ahead, raw Metal style from the past, which very often got compared to MOTÖRHEAD back then (especially for what they had delivered on their alltime classic “Shock Waves”). After personally being pretty much confused at first, I surprisingly got used to this new element rather quick. The fact that the keyboards weren’t used to polish up the sound was probably the main reason why I started to like it after a few listens already. I mean, KILLER’s style has by no means become more symphonic, poppy or progressive because of that. It’s more in the vein of bands like DIO or early PRETTY MAIDS and how they used it in their early days – raw, crushing Metal with some little extra melodies courtesy of the keyboard. And don’t tell me that tracks like ‘Broken Silence’ or ‘Crash And Burn’ (just to name two out of the twelve) are lacking the old energy now… So, if you already liked KILLER’s previous four albums (which all got re-issued recently through Mausoleum as well; see re-releases section) and if you are open minded enough for some refreshments in that wellknown sound, make sure to check this comeback release out. “Broken Silence” has definitely got some very cool songs on offer! www.4-killer.com