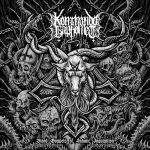 There’s nothing like primitive, chaotic dungeon Metal. I mean, what do we all listen to Metal for in the first place? We want the loudest, most barbaric form of energy release we can possibly handle. KOMMANDO BAPHOMET brings it to us one thousandfold. I wanna feel like I’m in the middle of the most disastrous demonic murder-spree in all of Hell. Whether it’s MORBOSIDAD, HELLFIRE DEATHCULT, ULULATUM TOLLUNT or ANTICHRIST SIEGE MACHINE, bands with this much fury are exactly what I need. Well-polished progressive or tech Death has its place. But fuck, I want that wall of sound that engulfs me in its horrid embrace and squeezes the pitiful life out of me. ‘Blood Bible’ starts the album with a muffled aura of pure destruction. The guitars smother, the vocals screech and the drums thud in a trance-like tribal ritual. ‘Unholy Fires Of Retribution’ is along the same vein, which is a good thing. In this particular genre, we don’t need much diversity. That’s not the purpose of Dungeon / War Metal. ‘Caos Devorador’ really just makes me feel like I’m covered in sewage. ‘Impious Blackdeath Order Of The Kommando Baphomet’ (god, I love that title) carries on the destruction as ‘Seven Holy Virgins’, with its churling guitars and monstrous belches, sucks us into the maws of instant mutilation. Ok, I could continue to describe the remaining tracks ‘Living Hell’, ‘Irongoat Coronat’ and ‘A Thousand Corpses’, but I have a feeling you get the idea of how “Blood Gospels Of Satanic Inquisition” sounds throughout. KOMMANDO BAPHOMET deliver an album of tracks which are exactly what I want to hear. It’s putrid, it’s massive. it’s a goddamn rib-breaker. While giant fans on stage are blowing air on the hair of members of MORBID ANGEL when they play live, KOMMANDO BAPHOMET are kicking the shit out of everything in their sight. For more band info contact zukinuno@gmail.com or visit the label site www.godzovwar.com