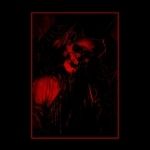 My brother wears his KOMMANDO BAPHOMET t-shirt proudly, which I gave him along with their first album “Blood Gospels Of Satanic Inquisition”. Both he and I were immediately drawn to their primitive, War Metal rhythm and phantasmagoric vocals. Less than a year later, “Under The Deathsign” was released. There’s not much better than a band that understands that recording new music is something that keeps the Metalheads interested. Not much information is known of guitarist / vocalist N. But drummer / vocalist Vulturius has been in more bands than I can count (including IRAE). And I can count pretty high. ‘Necrology’ opens up the album with whispery atmospherics until a plodding, Death Metal dirge thunders its way into the mix with almost-slowed-down guitars. Halfway through, the sound of dim dungeon metal erupts in a panic attack of distant, echoing vocals, hell-spawn drums and rapid-fire guitars. ‘Restos Mortais’ is honestly more of the same. But that’s what we actually sort of want, isn’t it? Fuck experimentation. This is what this genre of Metal is all about… barbaric, raw and aggressive. ‘Chapel Of Bones (Part I and II) follow similar paths of anxiety-inducing chaos as ‘Forged In Nightmares’ sounds exactly as it’s titled. The album continues with a track of steady drumming in ‘Bleeding Evil’ that both hypnotizes and mesmerizes the more the song winds and twists its way through our ear canal. ‘Encarnacao Divina’ throws some doom into the first couple of minutes before metamorphosing back into the demon-child that the album has grown into. ‘Deathsign Of The Kommando Baphomet’ leads the album to its end, never letting up and never apologizing for its bestial raging throughout. “Under The Deathsign” is a creature hungering for its prey. KOMMANDO BAPHOMET lead the pack. And if you let this album sneak up on you, you’ll be trampled and disgorged like the feeble weak string of flesh that you are. For more info, check out www.godzovwar.com