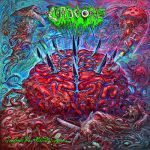 You’ve got to give LORD GORE credit for being interesting. The album cover of “Scalpels For Blind Surgeons”, although really cool, is actually less crazy than their other two. Featuring some sort of brain-looking thing with spikes protruding from it, the art is an eye-catcher. They’re even more attention-inducing on earlier covers “Resickened” (with bloated bodies being tortured) and “The Autophagous Orgy” (with a bloody orgy being acted out). Now let’s look at the band members’ names, shall we? Gurge (from FORNICATOR) on vocals, Maniac Neil and Putrid Pierce on guitars, Jesus H Dump on bass, and Colon Bowel on drums. If anything, it sets the tone for their first album since 2004. And much like FORNICATOR (if you’ve seen’em live, you’ll know what I mean), it’s hard to get bored with LORD GORE. ‘Planet Of Forgotten Flesh’ starts it off with an off-kilter array of pig-like snorts (I’m not even sure how Gurge accomplishes that) and somewhat intelligible growls along with solid Death Metal guitars. The guitars in ‘The Deformer’ are all over the place… like they’re pedaling a fiery tricycle in and out of demon-operated vehicles. ‘Incubation Sickness’ is a fucking blast of sheer energy that satisfies our Metal appetite. The fourth track ‘Lord Of The Flies’ chugs and mesmerizes as the drums rapidly stay in rhythm. ‘Daudiskegg’ produces some lightning-fast riffing that made my head spin the first few listens. ‘Spare Parts’, ‘Million Maggot March’ (great title) and ‘Enthenogenocide’ (with its ear-ripping pig gurgles) all shatter our expectations on what brutality is about. ‘Attack Of The Stem Cell Junkies’ wraps up this nightmare gallery in a bloody plastic bag and dumps it in the river. This is a bloody disgusting, vile, decomposing hunk of rotting flesh waiting for us to sink our teeth into it’s grisly meat and ingest it with diabolical, metal bliss. Here’s hoping it doesn’t take the band another 15 years between albums. For more info, check out www.facebook.com/resickened, www.everlastingspew.com