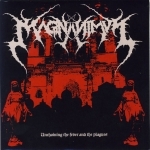 The Death Metal scene from Chile is amazing and in a way mysterious to me. They have plenty of great Death Metal bands around, unfortunately it seems that the masses don’t really recognize that. Bands like the mighty UNAUSSPRECHLICHEN KULTEN or GODLESS should tell everyone that this country has a lot to offer when talking about brutal Death Metal. MAGNANIMUS are no exception here as they are one more brutal Death Metal outfit the way I know it from other Chilenean Death Metal heroes: the music is played usually in intense tempo with plenty of blastbeats, brutal and deep vocals and shredding sometimes weird guitars. You should not expect this boring clinical Death Metal sound which many American so claimed high technical Death Metal bands offer us today, MAGNANIMUS play brutal and fast Death Metal not forgetting to stick to the old school Death Metal roots this music requests. In this regard I can figure out influences from old MORBID ANGEL, ANGEL CORPSE and SADISTIC INTENT to name just 3. “Unchaining The Fever And The Plagues” is the vinyl release of their demotape with the same name released back in 2003. Although this is quite an old release it sounds fresh and interesting to me. In 2006 they released their debutalbum called “Storms Of Chaotic Revelations” which I haven’t heard so far but from what I read Blood Harvest Records will take care of the re-release of it, too. Check out MAGNANIMUS and support the Chilenean Death Metal! Available at www.bloodharvest.se.