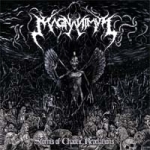 MAGNANIMUS’ "Storms Of Chaotic Revelations" CD was already released in 2006 through the label Rawforce Productions… Now 3 years later Swedish Blood Harvest Records released this album in the LP version. Well, this is only half the truth, because it’s not the CD-version pressed on vinyl, the whole songs got re-recorded incl. 2 different songs and if that wasn’t enough the order of the songs is different on the LP-version compared to the CD-version. This LP-version looks impressive as the coverpainting done by Daniel Self Desekrator is fuckin’ impressive and looks mighty in this size – that’s definitely a plus factor of vinyl. This coverpainting is also included on a poster which comes along with this version. Anyway, I guess the name MAGNANIMUS is not really familiar to most of the Voices readers as the band isn’t very active in promoting their music with the today’s possibility, which means they have no homepage, finally at least a myspace page. This is not the first Chilenean band acting like this as e. g. UNAUSSPRECHLICHEN KULTEN are by no means any different. Call it oldfashioned, call it outdated, call it underground mentality, call it whatever you want. MAGNANIMUS do not impress with an outstanding presentation on any kind of online platforms but impress with highquality Death Metal brutality. The brand "Chilenean Death Metal" with such acts as GODLESS, the already mentioned UNAUSSPRECHLICHEN KULTEN or MAGNANIMUS is probably as strong as never before even if names as TOTTEN KORPS or ATOMIC AGGRESSOR (of which 2 members are involved in MAGNANIMUS, too) were already quite known since years. The guys’ brand of Death Metal is ultra brutal blasting Death Metal, played tight as hell and offers one good production for these type of music. As this is a re-recording and slightly different to the CD-version of "Storms Of Chaotic Revelations" I can only recommend this release to everyone out there who’s looking out for high quality Death Metal from musicians who know how to play this stuff and who are active in the scene since many years. Even those who already have the CD-version are meant here. Buy it from www.bloodharvest.se and check out www.myspace.com/magnanimvs to see MAGNANIMUS’ first online presentation. 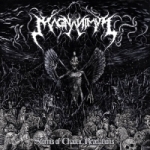 I’ve recently moved places and thus this little review here starts with a problem: somewhere in these boxes there is the original version of this 2006 released album which after a 2009 vinyl release on Blood Harvest now comes out again on CD incl. some bonus tracks taken from the “Unchaining The Fevers And Plagues” Demo ’03 which also had been issued on wax. Thus, I first thought: why? After consulting the secret tome of metal-archives.com the veil of confusion lifted: after its original release, Chilean Death Metal warriors MAGNANIMUS decided to re-record parts of the album as well as skilfully rearrange, edit, remaster and overall improve the whole platter to – and I like this detail from the info sheet a lot – make it sound more like the aforementioned demo, haha, brilliant, isn’t it? This “new” version came out in ’09 on Blood Harvest (that vinyl is in another of my boxes) and has now been expanded with three tracks taken by Mushantufe resulting in the ultimate CD version of this opus. But back to "sound more like the demo", well, the big surprise is – this album here does not sound like a demo at all but like an underground blockbuster from hell! A heavily pounding drum sound – the midpaced doublebass driven sections crushes you like a thunderstorm – ripping, incredibly evil sounding guitars and raw, deep growls that are far more devastating and brutal than today’s pig squeal fun "Death" Metal crap. Reminding me of a bestial bastard son of INCANTATION, early IMMOLATION, MORBID ANGEL, SINISTER, in terms of brutality even some early CRYPTOPSY, this trio understands how real Death Metal should be executed: merciless, barbaric and violent to the max. No big surprise as members of this band used to be active in ATOMIC AGGRESSOR and other Chilean cults. Despite being a truly unholy massacre of blasting ferocity, the sheer quality of riffs, some slower passages as well as great leads that wander in best Trey Azagthoth style from gloomy melodies to total chaos "Storms Of Chaotic Revelations" never gets boring but keeps your attention nailed down to the speakers like Christ’s hands to the cross. Due to the fact that the additional tracks offer the same level of quality in terms of song writing and production as the rest of the album, this is surely the ultimate version of "Storms…" and a mandatory buy for all Death Metal lovers, along with the MELEKTAUS album the best Death Metal record ever released in Chile! But damn…in which box is that one? www.myspace.com/magnanimvs, www.mushantufe.com