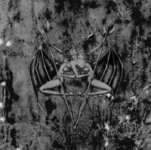 Black Metal from France again! It seems like this country has taken over the banner from Norway for once and for all and MALHKEBRE is another example of their fertile scene. Hadn’t heard from them before, but discovered they’re quite active and already released a demo in 2000 called “In His Name”. This EP contains four tracks ‘Nothingness Way’, ‘Première Louange’, ‘Obscurus Religiosus’ and ‘Fidèles Serviteurs Serviteurs’. “Prostration” is originally released on Battlesk’rs Productions in 2006 and rer-eleased by Ahdistuksen Aihio Productions on CD and 12″ LP as far as I know. ‘Nothingness Way’ starts with a disturbing vocal eruption that remembered of ABRUPTUM with a typical cave-sound but leads to a fast an furious attack with remarkable grim vocals by Eklezjas’Tik Berzerk that are as sick as MAYHEM’s Atilla. The riffing is not always original but very intense and some apparently out of tune melodies increase their morbidity and intensity. The bass is so fast it almost outspeeds the guitars and also the drumming is intense and tightly played. MALHKEBRE is extreme in every way and the fact that they don’t stick in a hyperblasting cruise control, but incorporate suitable breaks and variation in speed show their class and clearly MALHKEBRE is disturbing force. They’re very talented and “Prostration” will most definitely please fans of extreme Black Metal. For those: it has it all in terms of rawness, sickness, speed and grimness and you should check this one out! For some weird reason I think Death Metal fans who dig IMPRECATION’s “Theurgia Goetia Summa” should take a listen to this! For more information and soundsamples go to www.myspace.com/malhkebre or www.ahdistuksenaihio.com