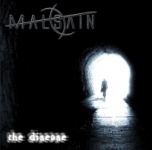 The warrior cries in the distance as the sound of damnation comes near. This is the sound of MALSAIN. From the icy cold lands of Norge, this is the second album-attack of steel and magic from this five piece unit of war. To call them just Black Metal is to call any warrior just a soldier. No, this is more than just Black Metal. As a sword that is coming to the head… like an arrow in the eye… this is like the sound of the cold lands reaper…a mid-paced attack of sharp guitars, a magnificent sound and production, with a few but effective acoustic parts, used to enhance the atmosphere with some really demonic vocals, courtesy of Skumring… the name of a female battle commander… this mighty sound of darkness reminds me of fellow comrades of GEHENNA in their early armored days… although there are keyboards used, and quite a lot in fact, they are clever enough to give them the exact weight on the music, and just add touches to the music… they keep guitars loud and up-front… like axes in the battlefield, the sharp side comes always first… once in a while, this sounds of darkness will speed up their killing spree… but just on small amounts, to therefore maintain their triumphant march… some touches of early MY DYING BRIDE can also be heard…I can now foresee this as the music that a wounded warrior will be listening to before the scythe of death comes near of the snowy battlefield he lies in fatally tired… for those worshippers of Black Doom perdition and Metal… probably, their only mistake is that some of their hymns tend to sound quite similar, and a bit more of speed variation would come in deadlier… but as it is, the ones in their path are condemned to decapitation with a frozen sword. Also a bit suicidal sounding at times. Maybe that wounded hero will more likely take his on life with that dagger used as last resort. As it is, the saga of cold blood spilled becomes interesting, but maybe greater battles are to come. www.darkessencerecords.no