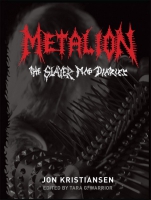 This is the 2nd book in my collection with a foreword (one of seven) from Chris Reifert and whereas “Swedish Death Metal” (the first book with a foreword from him) was a revelation, a bible when talking about Death Metal, the Swedish one, “The Slayer Mag Diaries” is something completely different. When buying this book for the quite heavy price of 25,95 € I thought of something different. You know, I have issue 9 and 10 of Slayer fanzine in my collection; I could have issue 8, too, but perhaps was too short in the underground and probably had too much respect for a person like Metalion. And I lost interest for the later issues without any really known reason, if I think back. Well, after ordering those 2 issues I wrote some letters with Metalion back and forth, nothing special, short letters, though from Metalion, which was something special as he’s one of the most important persons in the worldwide underground scene, but as I don’t remember the contents anymore I’m more than sure Metalion doesn’t even remember me and my name. And that’s ok. But to share letters with him says everything and that’s the great thing you get out of the book: writing letters, being involved in the underground, being part of something big, big in our tiny little world in those great days. And perhaps there is hardly a person in the underground who was more involved in the up and downs of this goddamn scene. Quote from page 627: “The older I get, the more bitter I become, going out to shows and seeing what kind of people are there. I thought the Metal world was my world, but it’s definitely not anymore. It was my everything and all I had. (…) In the past, being part of the Metal scene really demanded extreme dedication and great individuality. Now it seems anyone can stroll into a mall and buy a t-shirt from a band they have barely even heard, and so much is lost in that transaction. Searching hard for the music didn’t mean the music was better – it just meant that the people were better”. Reading those introductions to each issue is truly interesting and watered my eyes here and there. Interesting memories and notes from one of the most important person in the underground, as I already said before. And that’s it, guys out there, what makes this book that special. With a lot of enthusiasm, making friends and being yourself you could be someone in the underground and remember those great times as probably among the best times in your life. And Metalion gave a lot but also sacrificed a lot during his life and finally found his way out of it and sharing his memories to persons interested in it. Expecting a collection of Slayer Mag reprints I recognized this is only a small part of it. The reprints and excerpts of the earlier issues are great, interesting and full of anecdotes (issue 7, NAPALM DEATH interview with Bill Steer: “Do you see yourself in NAPALM DEATH in five years?” Answer: “I doubt that the band would last that long somehow, but who knows…?” We know it better now…), but the really fascinating moments while reading this book came from Metalion’s introductions and “diaries”. Along with some very rare and, because of Metalion’s current profession, new photos this is a great read and a heavy one. 2,4 kg, 722 pages + a couple of glossy-pages where you can see some photos he took. Surrounded by a hardcover – a book totally worth the price of 25,95 €. It’s a pity that this seems to be the last contribution of Metalion to the Metal scene in written form, without doubt it couldn’t be a better one.