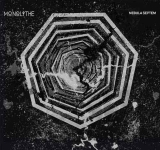 MONOLITHE is a French Funeral Doom act that is active since 2001 and “Nebula Septem”, their seventh full-length will be released early next year by their countrymates from Les Acteurs De L’Ombre Productions. MONOLITHE music is labeled as Funeral Doom Metal in different sources on the web. I never heard their early stuff; in fact, this is my first approach to this act, so I can’t compare this with some previous works. Anyway, the Funeral Doom label seems to be a bit imprecise to me since their music is not slow enough for my taste (I was expecting something like MOURNFUL CONGREGATION or SKEPTICISM). Well, MONOLITHE’s music is atmospheric, dark, depressive and, sometimes, melodic. ‘Anechoic Aberration’, the first track, is a mid-paced one charged with some heavy riffs and slow patterns. ‘Coil Shaped Volutions’, the third song, is one of the heaviest and slower compositions here. ‘Gravity Flood’, the seventh and last track, offers a good instrumental intro worked on keyboards mainly to evolve to a guitar-oriented opus after the third minute forward. Keyboards fill the music during several passages on the whole album. One thing that is not convincing for me is the melodic work on guitars. It sounds totally excessive and unnecessary from time to time. Sometimes less is more. MONOLITHE’s music reminds me of Finland’s Funeral Doom act COLOSSEUM. Something at least anecdotic is that each track is 7 minutes long! In conclusion, this work is good but far from outstanding. More information at www.lesacteursdelombre.net. Follow the band on Facebook: www.facebook.com/monolithedoom.