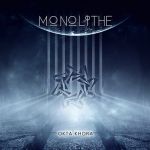 In the uprising French Metal scene of today, a group like MONOLITHE from Paris is a kind of a veteran band by now. Nearly 20 years on the scene, the Doom Metal six-piece already released their eighth album lately. Yet they still are far from being a big name or at least a band of greater reputation outside the underground. And that’s hardly surprising, as MONOLITHE always did their own thing. The first four albums (named “I” to “IV”) only consisted of one very long song each, while the next two albums had three songs of exactly fifteen minutes running time. Last year’s “Nebula Septem” (the first release for the renowned Les Acteurs De L’Ombre Productions) went an extra mile, as it contained seven songs of exactly seven minutes. With “Okta Khora”, they kind of broke their habit a little bit. Of course the eighth album album contains eight songs, but not all of them are exactly eight minutes long. Both, the title track and ‘Ignite The Heavens’, are split into two parts of four minutes, as a kind of trick to still stick to their habits. Well, enough for the band’s fads here, as I am to talk about the music of MONOLITHE that also packs a punch. I rarely heard a band that has a comparably unique approach to Metal. From the first notes of ‘Okta Khora (Part 1)’, it is clear that MONOLITHE are more than Epic Doom. Maybe Progressive Doom is a term to define their style, as they often put parts in their compositions that remind of Prog Metal masters like PSYCHOTIC WALTZ, OPETH or DREAM THEATER or classic Prog Rock bands from the 1970s, especially YES came to mind here. Bombastic string arrangements sometimes even forge a link to soundtracks like in the second part of ‘Okta Khora’. As impressive as it is, the complexity of the soundscapes often has counter-productive effects, as it often is too dissolute and makes the listener lose track of the ideas of MONOLITHE for a while. The rather rare use of (in this case harsh) vocals add up to this effect as well. But this does no harm to the exceptional quality of songs like ‘Onset Of The Eighth Cycle’ or ‘The Great Debacle’. It is just that I’d rather recommend “Okta Khora” to those who dig Progressive Metal in the first place. Find out more at www.facebook.com/monolithedoom or www.facebook.com/ladloproductions