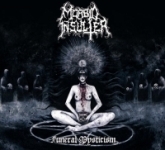 Yet a compilation from a band that ceased to exist way before it was meant to, due to the man behind the band’s untimely demise last year. MORBID INSULTER hails from Sweden and delivers a hellish mix of Black and Thrash Metal with a dark, eerie and doomy atmosphere to it. We get all the band’s releases on this double CD release from demos to promos to a track from a good old compilation tape and the EPs, a fine collection of grim Metal. The band has been hiding a bit in the underground so far, though I reckon this release will get MORBID INSULTER out to a wider audience and give them the praise they deserve. They have always been making uncompromising grim Black Metal with a edge of mysticism and a mean to the end. The ambiance surrounding the tracks are immense and brutal, when the music first gets a grip into the listener, it won’t let go again. When the tide is high the atmosphere and feel peaks, it is with resemblances to shivers as only DARKTHRONE, MAYHEM and BURZUM could deliver them back in the days. It is quite a shame MORBID INSULTER ceased to exist before the potential was fully met, as the band reek of potential and energy and listening to the twenty tracks on this release and the quality of them, thinking of what beast they could turn into in the future, hurts quite a bit, as not many newer bands possess as much quality as the music on this compilation. "Funeral Mysticism" offers grim Black Metal with an energetic thrashy delivery and a deep and dark doomy atmosphere with an eerie and mystical intense atmosphere. Beware to enter the realm of MORBID INSULTER, as you might never will get out of their grip of death and destruction. This release is a must have for fans of the genre and grim Metal in general, the perfect soundtrack to get through Christmas. www.myspace.com/morbidinsulter, www.ihate.se