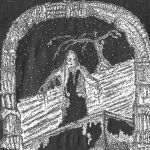 The Polish MORBID WINDS from the area of Poznań are a pretty new band on the scene. Not even two years after their formation, with two demo tapes in their discography, MORBID WINDS are ready to unleash their first album upon mankind. And this full length is a bold one, as it features only one song of more than half an hour running time. It is even more bold as MORBID WINDS play raw Black Metal with a more minimalistic approach and an adequate production. A comparison to DARKTHRONE in the mid to late 1990s can’t be denied. Thus I expected a very toneless and rather boring result after listening to the first minutes of ‘The Black Corridors Of The Abyssal Depths Of Existence Opened Their Gates’. But fortunately I was wrong! Even though it is not that easy to keep up the tension over such a long time with such minimalistic means, MORBID WINDS did very well and made the song quite exciting. Some parts of the song are accentuated with some keyboards and the breaks, the rhythm and speed changes are well placed. Some hints on very old CELTIC FROST, HELLHAMMER and early MAYHEM bring an extra tension. So as bold as the concept of “The Black Corridors Of The Abyssal Depths Of Existence Opened Their Gates” might be, as dangerous as the idea is, it turned out successful. Anyone of you into old fashioned raw and simple Black Metal with a certain something should give MORBID WINDS a chance. For the real trve analog freaks, there will be a tape edition of the album. For the CD, check: www.facebook.com/morbidchapelrecords