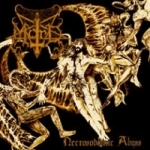 Referring to the band, so-called “Sadistic Black Metal” is served. Sadistic? Yes, because it is quite painful listening to music that has been played by countless bands… MARDUK, GORGOROTH, DARK FUNERAL, early EMPEROR to name just the most known. Back in the first half of the 1990s Osmose was some kind of highly reputable trademark, and if this second full-length (additionally MORD released two mini-albums) would have been released back in those days it would have been quite impressive. It is not a weak output regarding the production, the ability of the musicians to handle their instruments, all in all Black Metal standard, so to say. But I guess in 2008 only die-hard Black Metal fans are willing to listen to an album like “Necrosodomic Abyss”. www.mord-horde.com