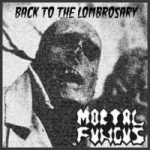 MORTAL FUNGUS
Back To The Lambrosary
(Gentle Exhuming Records)
22:28min

For some, it’s simply a matter of time, of finally focusing and blossoming into a fully functioning unit. Such was the case for MORTAL FUNGUS, a band that amazingly formed in 1991 and released nothing except a demo tape in 1999, eight years after the band formed. Since then the band released a split with ARKENEMY in 2003 and resumed their prolonged silence. That is, until this year. Gentle Exhuming Records has released, "Back To The Lambrosary", MORTAL FUNGUS’s first full length LP. It’s fairly clear these songs were written some time ago, i.e. before Death Metal went south in the mid 90s. Of course, there’s always the possibility that the songs are fresh, in which case MORTAL FUNGUS deserve to have their name sewn into a flag. Their music is indeed very old sounding with flurries of blast beats so characteristic of Finnish bands like CONVULSE, a deep growling vocal arrangement which sounds like a cross between Kam Lee and Martin Van Drunen, and finally, guitar which, unfortunately, is perhaps the album’s biggest detriment. Other than that, a marvelous job. www.myspace.com/gentleexhumingrecords