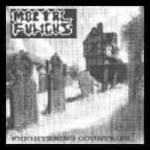 Are you stuck in early 90s Death Metal? Tired of all those soulless technical “faster-harder-louder” bands? Then MORTAL FUNGUS from Italy might be something for you. Formed in 1991 they recorded two demo tapes and then split up. In 1998 original member Frank put the band together again and this is the result: Florida style Death Metal in the vein of OBITUARY, AUTOPSY or NECROPHAGIA (Florida? – Frank). Personally, I miss the force of those bands when listening to MORTAL FUNGUS. They do get the vibe across but the songs don’t necessarily force me to go crazy. Take the bass solo on ‘Season Of Survival’, for example: it sounds definitely cool but it somehow takes away the drive a little as well. Maybe that’s the (South) European roots and therefore sort of MORTAL FUNGUS’ identity, I guess. Pretty strange (= cool) solo on here in comparison to the rather melodic ones the band prefers to come up with. Plus a solid cover of ‘Service For A Vacant Coffin’. Finally: I don’t find the production on here that bad… sure, with more money it might have sounded differently but I’ve heard much weaker ones as well. Right now the band is rehearsing 3 new songs for the forthcoming “Face Of Terror” CD. Additionally, Frank is re-arranging old MORTAL FUNGUS stuff with original guitarist Dan Romano. www.mortalfungus.com