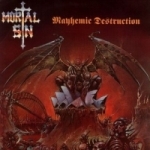 I still remember the first time I was faced with this Australian band. Back there, it was all new for me to know about a Speed Thrash Metal band from there. All I knew, from the few magazines and fanzines was that they were more or less the Australian answer to METALLICA. Then again, by looking at the cover art (you know the demon on the front destroying Australia, the Opera House and all of that) I was thinking that probably the disc was going to be more in the brutal Thrash vein. But no, the cover was way more brutal than the music itself. Yes, they are in the early METALLICA vein, although I would say that they actually sound more to a guitar-crunchy version of IRON MAIDEN than anything else… I mean, a couple of song choruses almost sound like a carbon copy… but I must say that there are some enjoyable tunes like ‘Lebanon’, but more and more you will find sounds familiar… here it sounds like ANTHRAX, there you have more of a TESTAMENT sound, and even some early SLAYER… wow, that reminds me that it was easy back then to make a reference of how a band sounds, hehe… ok, back to the album, one thing that sometimes gets on my nerves is when the vocals try to be a bit growled… MORTAL SIN is quite safe in the more melodic territory, actually that one where the songs are not that fast, the mid tempo thing, is where they go better. When they try to speed up or sound a little more "brutal" to say it in some way, they lose a lot of power. They just do not simply reach what they wanted to do. And I think that is one of the reasons the band did not get better recognition. They were hard to categorize as a Thrash or Speed Metal band, but definitely they were more than just Heavy Metal. I really like the way they pay homage to MAIDEN most of the time, and the attitude of trying to make it heavier scores points in my book, but they kind of felt short in doing killer songs. In those days, METALLICA was vastly superior. In fact I think they sounded more to them on their second album "Face Of Despair". Also the production here takes away some power. I mean, it sounds clear, but probably suffered from some bad mastering, as it does not possesses the force contemporary bands offered in their releases. This new version additionally comes with seven live tracks (from their 1990 show in Düsseldorf, Germany when they were supporting TESTAMENT – Frank) of some of the same songs contained here, that actually sounded a bit more powerful than the studio versions. They are still going on and have released a couple of albums more or less in the same vein, so kudos for them for going strong. As a nostalgia value document, it is good, although I must be honest to tell that the band did not grab me back then nor it has changed 20 years from then. They are still playing, and the few things I have heard are way better than this debut album. www.mortalsin.com.au