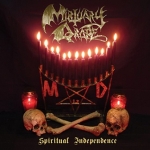 Very few bands nowadays carry on the flag of quality with their name. Italy’s legend MORTUARY DRAPE is without a doubt one of the few, one of the proud. A decade has passed since their last full length “Buried In Time"; an album that has been criticized by many die-hard fans of the band as not being in the same mystical and occult league as their previous works, but an album I must say, I think is as good as any other from their career, if maybe has a bit more “brighter” sound and a more Death Metallic guitar tone. Mastermind Wildness Perversion then took the right time to assemble a new line-up, and then unleashed a new horse of apocalypse upon mankind with this new album. And, for those knowing the band is a blind purchase. And once it spins it will devour your soul. Yes, their style is intact, and for those following this band since back in 1986, since the first notes of “Lithany” one can hear that their necromantic form of occult and quality Black Metal is there. MORTUARY DRAPE’s sound relies a lot on traditional Heavy Metal, being VENOM, MERCYFUL FATE, very early IRON MAIDEN and JUDAS PRIEST as well as obvious BLACK SABBATH as part of their sound. Then it becomes more corrosive with the touches of bands like very early DEATH, SLAYER, SODOM and BATHORY to mix it up with their very personal touch. And that style has been with them forever. Their compositions, which I must add are done with great detail, and great performance (I must mention Wildness Perversion also did the drums on this one although live he only does vocals), have always been done with a very occult and deep atmosphere, with a feeling I can only describe as a dungeon-like essence of an old Monastery which secretly practices occult rituals. The band is no stranger to melody, and has mastered the art of introducing it in every sense with a suffocating atmosphere. And Wildness Perversion’s vocals are a bit deeper and brutal than in previous efforts, giving the album an identity of its own. After many listenings to the album, yes, there is a certain similarity with their previous efforts like my all-time favorite “Secret Sudaria”. If we need to wait another decade for a new MORTUARY DRAPE album, so be it. As with every release this band does, probably my top contender for album of the year. www.mortuary13drape.com, www.facebook.com/mortuarydrape, www.irontyrant.net