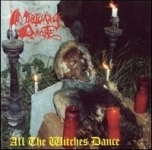 After the much needed and extremely well-presented reissues of "Into the Drape / Mourn Path" and "Secret Sudaria", Iron Tyrant Records has now re-released the ever elusive debut LP by MORTUARY DRAPE, "All The Witches Dance". Originally released by Unisound in 1994, the first vinyl version suffered from relatively poor sound quality as did many of that label’s releases. Consequently, MORTUARY DRAPE fans have been awaiting a high quality reissue such as this one for nearly two decades. In many ways, MORTUARY DRAPE are the quintessential Italian Metal band. Drawing on the legacy of bands such as BLACK HOLE and DEATH SS, MORTUARY DRAPE relied heavily on the use of atmospheric horror in their sound. Where those bands were mostly theatrics, however, MORTUARY DRAPE demonstrated that there was a deeper core to their work. Like many of bands within the second wave of Black Metal, MORTUARY DRAPE sought to distinguish themselves with their passionate reverence for dark and occult forces. It is well-known that Italy, despite (or possibly because of) the presence of the Catholic church, has long been an epicenter of occult activity and MORTUARY DRAPE, more so than any other Italian band before them, tapped into this current. Indeed, even the cover of the "All The Witches Dance" album is rumored to be a real corpse that the band excavated for ritualistic (and photo opportunity) purposes. Listening to MORTUARY DRAPE one gets the sense that they were among the first Black Metal bands to truly create music that extends far beyond the sonic realm and into something more powerful. Musically, the album is extraordinary and timeless. “All The Witches Dance” is unarguably among the most important Black Metal albums of all time. Although it was the band’s first full-length release, by the time it came out in 1995, MORTUARY DRAPE has already released a number of demo and EP recordings thereby firmly establishing themselves in the underground scene. Thus, their debut full-length reveals the expertise that the band had developed over the preceding decade. From the very beginning, MORTUARY DRAPE proved to be adept at crafting atmosphere without sounding monotonous or repetitious. Their songs exhibit a craftsmanship every bit as potent as the most sophisticated Metal acts of that time. While many bands that followed over the next decades seemed content to rely solely upon image rather than skill, MORTUARY DRAPE delivered both. Like the “Into The Drape” MLP that preceded it, “All The Witches Dance” employs heavy use of organ passages and chanting to cast an opaque shroud of evil upon the album. While many bands that use these same ethereal elements merely sound trite and gimmicky, MORTUARY DRAPE implements them with fluidity and craft and avoids that pitfall. The songs on “All The Witches Dance” are predominantly rooted in a traditional approach to Black Metal and express less of a deviation from the foundations laid by VENOM, CELTIC FROST and BATHORY as well as more traditional Heavy Metal styles than many other second wave practitioners of the Black Metal arts. Driving minor key riffs underscored by heavy bass and tactical percussion serve to firmly attach MORTUARY DRAPE’s sound to the roots of the genre. Cutting through the dense aural fog are searing yet melodic guitar leads that enrich the sound with an air of macabre tragedy. The vocals supplied by Wildness Perversion (the only constant member of the band through the years) add the final touch to the record. Wickedly majestic, the vocal intonations on this album command the listener through the obscure pathways of the consciousness of MORTUARY DRAPE. While every song on the album is, by itself, impressive, the true artistic value of “All The Witches Dance” is the manner in which the pieces work together to form a perfect synthesis of ideology, imagery, and sound with no element unduly overshadowing the others. Also, while the effect of many albums from that era has been dulled with time, “All The Witches Dance” still sounds as brilliantly malefic today as it did in 1995 and no band since them has attained a sound and image quite like them. This reissue was badly needed and Iron Tyrant, as usual, has delivered an exceptional edition of it. It should be noted that there are quite a few different variations (both from Iron Tyrant and the band c/o Wildness Perversion) of this release and at least one of the variations includes an unreleased live performance. www.irontyrant.net