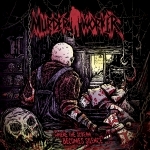 MURDERWORKER
Where The Screams Becomes Silence
(Base Record Production)
39:00min

In 2018 a band without an entry at metal-archives.com is like finding a Blue Mauritius. Pretty rare and unusual. Although formed in 2017 the trio from Sevilla, Spain, has not only no record in Encyclopaedia Metallum furthermore the Bandcamp page features only one demo track. At least the band earned some 300 likes at Facebook. Anyone now lamenting about the good old times please stop, because the wheel (and a few more things) is invented, the time is now and with an internet appearance like this the band will not generate much attention. Which is sad somehow, since the material offers well-played Death Metal. If you take a look at the cover, you know what to expect. The band is traveling down the more brutal way, the songwriting is kept simple and with twelve songs in 39 minutes without any interludes, just a short intro, the listener knows what to expect. More than once “Where Screams Become Silence” reminded me of OBITUARY and SIX FEET UNDER. Especially the vocal performance, this husk grunts and throaty screams seems obviously influenced by Chris Barnes. By the way I am talking of SIX FEET UNDER until 2003, because after “Bringer Of Blood” I stopped keeping an ear on their releases… must be time for “Graveyard Classics V” by now. But with a shake of the head back to MURDERWORKER. I am glad that Base Record Productions gave the band a chance, since this blend of mid-tempo based grooving Death Metal should definitely find some admirers. For me the icing of the cake would be more sick and twisted riffs directly from the grave, but nonetheless this debut is worth a listen. More info at: www.facebook.com/murderworker-1475327439205003,  www.facebook.com/baserecordproduction