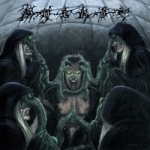 Nuclear Winter Records did great with catching up MYTHOS and releasing first their killer "Moulded In Clay" demo on a marvelous 10" EP with a topnotch packing and now their debut album "Pain Amplifier". The 10" EP is already sold out from the label and now NWR offers MYTHOS’ debut album "Pain Amplifier" on black gold for the first time. So what’s the difference to the CD-version, released in 1995 by Evil Omen Records, except for the format? Musically speaking there’s no difference to the CD-version at all. Nothing re-recorded (which was not necessary as the original sound killz), no additional song included – just the hidden track with the great cover of CARCASS’ very own ‘Reek Of Putrefaction’ which already could be found on the original CD-version. The other hidden track mentioned in the liner notes is, as Teemu guessed, not included here. I usually say that MYTHOS are during their "Moulded In Clay" – and "Pain Amplifier" – days a Death Metal version of IMPALED NAZARENE. Teemu didn’t disagree in the interview and even mentioned a BELIAL – likeness as well, simply because Jukka Valppu (guitars) played in BELIAL and in the pre – IMPALED NAZARENE band MUTILATION before founding MYTHOS together with Teemu Hautaniemi (drums). Offered here we have totally blasting Death Metal, but, and that’s unusual for those blasting Death Metal bands, with a helluva lot of variation. Each song has its own mood and flair and especially the drums are an important factor here. Teemu is an outstanding drummer and in my humble opinion was that already back then, even so he might disagree here. Where the CD had almost no cover, or, frankly speaking, a cheap one, the vinyl has a professional drawing in high quality on it. It’s great to see this album now in a layout the band (?) or at least Teemu is happy with. As I don’t have my original CD-version at hand right now, I’m not sure if the CD-version included the lyrics, I think they weren’t printed in the booklet and therefore are offered here on this vinyl for the first time (if I remember correct with the CD-booklet…). A difference to the 10" EP is that this LP includes liner notes which lacked on the 10" EP. I always enjoy liner notes on re-releases and those offered here in form of a story about the band activities around the time of the recording of this album are really interesting. I think it was a great idea to have Teemu involved in the making of this re-release. As he’s a very good storyteller can be recognized on the MYTHOS interview in the interview section and his notes on the inlet sheet are damn interesting. Though musically not differing to the CD-version I can highly recommend this outstanding killer album to every dedicated Death Metal fan as you don’t find outstanding songs as ‘In Veiled Language’, ‘Verses In Fire’ or ‘Unreal Moon’ on each 2nd album. In my words I can say that "Pain Amplifier" is a goddamn Death Metal classic which came a little late in those days of 1995 when Death Metal was trendy and Black Metal was cool! This album withstood the test of time, definitely! Now in 2010 every one can pick this jewel in vinyl form and figure out how great this album was and still is. Everyone? Well, everyone of those lucky 500 persons who are fast enough to grab it before it is sold out! Perhaps Nuclear Winter Records should consider a re-release on CD, too, as I’m not sure if the original CD-version is still available. With this layout and such a great music on it I won’t complain one single moment either. Check out www.nuclearwinterrecords.com for ordering details.