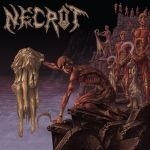 Unless you’ve been living under a rock the past few years, NECROT really need no introduction. Hailing from Oakland, California, the trio of Luca Indrio (vocals, bass), Sonny Reinhardt (guitars) and Chad Gailey (drums) pummeled our senses with their first full-length “Blood Offering” back in 2017. Their Death Metal blitzkrieg took the Metal world by storm. And if you had the chance to see them live before this pandemic spread its wings across the world, then you were lucky enough to witness a bludgeoning like no other. Now, with their new album “Mortal, NECROT have delivered another damn fine album that shows they don’t have the second album jitters. ‘Your Hell’ slithers like a hungry snake with its creeping guitars and hellstrewn vocals. ‘Dying Life’ kicks things into gear with a sonic gravedance that fucking rips and tears its way through our eardrums like a rampaging kobold horde. And don’t even think the band will take a breather as ‘Stench Of Decay’ continues the trampling, along with ‘Asleep Forever’, with riffs that could wake the dead, and ‘Sinister Will’ that’s sure to start a furious pit at any show. And goddamn if ‘Malevolent Intentions’ won’t knock you on your ass. NECROT simply doesn’t stop its Death Metal obliteration as the album rages onward. And then there’s ‘Mortal’, of which the album is named. It thunders, it swaggers, it crushes in every way possible. The heaviness is so thick it’s like a fog during a sandstorm. There is no more consistent album that was released in 2020. Matter of fact, if there’s one faint glimmer of hope in the year to end all years of horribleness in the world, it’s “Mortal”. But just beware, after hearing this, you may destroy some furniture or punch a baby. So proceed with caution. For more info, check out www.facebook.com/cyclesofpain, www.facebook.com/tankcrimes