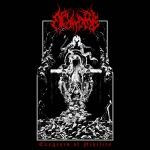 RAW! And I don’t mean the WWE wrestling show with the same name. “Exegesis Of Nihility” starts with a riff PROFANATICA could easily have written and a blast similiar to the drum patterns INCANTATION uses when they are angry. Just imagine getting between The Undertaker and Kane – when they had their family issues in the 90s – and pissing them both off with some remarks about their childlike behavior and their ugly parents. Double-chokeslam-city, here we come! But back to NEXWOMB. “Exegesis Of Nihility” is the first full-length (when you consider 30min full length) from 2019. They already have a new demo out while I write this, so I consider the main man behind all this, Mr. Vardlokker, a quite productive person (wonder what Butt-Head would make of his name). He also appears in various other projects, but with he exception of WITCHBONES I heard of none of them. He is joined by V.C.T. on massive (!) drums. Vardlokker is responsible for the rest or as he states: “Sub-Atomic Harmonic Possession and Multi-Dimensional Neuro-Transmogrification”. That is my man. Let’s listen what NEXWOMB came across when they “studied the themes of nothingness” (just if you wonder what the title actually means). As I mentioned above: this is Black /Death Metal, the old school way, before Euronymous was killed. PROFANATICA, INCANTATION, BLASPHEMY, GRAVE MIASMA come to mind. Raw, aggressive, black and meaty. The production is a joy! This is the way it should sound, eight totally unpolished, tunes from the grave! Yet you can always hear what is going on and it pumps and crushes! Simple yet effective riffs with the right sequence of notes (absolutely no experiments!) and the right beats for every riff. Only the deep vocals suffer from the mass of reverb they were dunk in, close to being completely drowned. But I know that there are some of you out there who will say, that this is just perfect. The cover is what you expect from a release like that: Moyen style, black background and white drawings (skulls, monsters), red logo. Well, just look at the damn picture above. NEXWOMB made sure that nothing new nor original slip into this release. Only the songtitles stand out a little bit (‘Grotesque Dissipation Upon The Consecrated Temple Of Abrasax’ or ‘Exalted Scripturient Of The Aeon Kyclos (Throne Of Epinoia Nous Quantum Mainframe’)). DEMILICH anyone? But who cares about songtitles? Come on! Pfff… ‘Pile Of Little Arms’ my ass… Still I like listening to this freshly beheaded huge anaconda that simply does not want to die and keeps on crushing beast from NEXWOMB. It is not a classic, but a well-done take on known things. Like a match just inbetween Wrestlemania and Summerslam. Good fight, good night. More info at: www.facebook.com/nexwomb-212852468734393, www.facebook.com/morbidchapelrecords