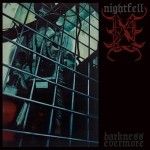 The second album by NIGHTFELL from Portland, USA, is entitled "Darkness Evermore" and I could not think of a more fitting title. Because during the 40 minutes playing-time it is getting dark, very dark. The band consists of two musicians, who also used to play in quite some other bands, but with NIGHTFELL they created an unique monster. Regarding the tempo of the five songs (‘Eulogy’ is just a short interlude) they all start slow and speed up to the end, which is maybe not really the most creative invention of the decade, but it is simply the mixture of not only different paces but the incomparable and thrilling melange of different styles. At the beginning the whole affair sounds like Funeral Doom or Doom Metal in general and then the music accelerates and typical Crustcore / Powerviolence riffs make an appearance while the drums, although no longer slow, delay the rhythm. Really sounds strange at first, but it works out brilliant. Just imagine a Powerviolence tune played at the wrong (slow) tempo. Some kind of Sludge Crustcore. The next element added is typical Scandinavian Black Metal, sometimes more in the vein of BATHORY ("Hammerheart") or IMMORTAL ("At The Heart Of Winter"), sometimes more like maybe ENSLAVED ("Frost") with hypnotic endless up-tempo drumming. By the way, did I mention the sometimes pretty melodic, more mellow sounding lead guitars? And do not tell me mellow and darkness can not work together, just remember a song like ‘Where Dead Angels Lie’ by DISSECTION. To cap it all the vocals sound like directly recorded from beyond, which means something between Death Metal growls and pronounced, clear singing. In its uniqueness I even dare comparing NIGHTFELL to bands like BÖLZER or MANTAR, although the music may differ in detail. http://nightfell.bandcamp.com, www.20buckspin.com, www.facebook.com/20buckspin