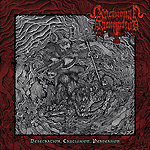 This turned out to be a pleasant surprise! Admitted, the fact that these guys perform extreme Black / War Metal brought some sceptism. Not many of these releases have stood the test of time and turned out to be classics. "Desecration, Crucifixion, Perversion" however is able to deliver on many fronts. Maybe because of the shortness of most tracks so there’s no time to loose grip. Also these guys can keep up the extreme speed without falling into superhuman conditions which makes it sound pure and real. The sound is low fi, but again it feeds the underground feel in a convincing way. The riffs are grinding and varying enough to keep it brutal. The vocals are deep and excellent. The leads are distorted and manic, but suit well. NOCTURNAL DAMNATION is a young South Korean band (there’s also an already defunct Swedish namesake) which started in 2010 and already released one demo ("Sadogoat Warmageddon Command – Promo 2011"), particpated on the "Bloodshed For The Wargods" split with SEGES FINDERE and PURIFICATION KOMMANDO. This one got released by Iron Bonehead Productions. "Desecration, Crucifixion, Perversion" is their debut and was already released in September 2012 on Danish Silver Key Records as a cassette limited to 200 hand-numbered copies. This version on Dunkelheit Produktionen features the demo as a bonus and a folded poster. A new cover artwork was made by Oik Wasfuk. This may be an interesting release for fans of IMPIETY, SADISTIK EXEKUTION, BLASHEMY, ANTICHRIST (Can), CONQUEROR, PROCLAMATION, BESTIAL RAIDS and the likes. For more info you can visit http://goatwar.egloos.com, www.facebook.com/pages/nocturnal-damnation/136457776421696, www.dunkelheit-produktionen.de