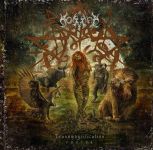 BEHEMOTH churchgoers take notice! “Transmorgrification – Partus” by NOMAD features not one, not two but three actual members from the aforementioned Death Metal rockstars. Originally formed in 1994 by Patrick Bilmorgh (aka Seth) and Waldemar Twardowski (also known by the charming warname of Bleyzabel Balberith), NOMAD have proved to be fairly productive, pulling out no less than six full-length works over 26 years of activity. With Inferno and Orion sessioning in on their respective instruments, I think most of you know already what to expect from this with a certain degree of precision: well played, ultra compressed modern Death Metal with strong ties to NOMAD’s national Death Metal scene (later VADER and HATE), maybe with a bunch of more interesting rhythm patterns here and there. An epic, omnipresent feeling of dissonant bravery permeates all songs, sum of which is possibly ‘Pantocrator’. Alas, the songwriting is as compact as the album’s absolutely static dynamic range. Wrapped in a hermetic cover art by Michał “Xaay” Loranc (NILE, EVOCATION, GOD DETHRONED, PESTILENCE and so forth) depicting some Savanna animals, one demon and a naked lady, “Transmorgrification – Partus” is about to be out via Witching Hour Productions on CD and LP. Useful links: www.facebook.com/nomadnomadichell and www.witchinghour.pl.

NOMAD - The Independence Of Observation Choice - by Nathan Shapiro