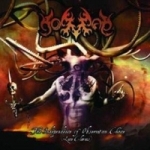 Originally released two years ago, this is likely the first most people have heard of NOMAD since they formed in the mid-90s. As you may expect, NOMAD is an anti-christian Death Metal band with all the trappings: blast beats, heavy riffs, growling vocals, and gurgling bass. But as this is the staple of every other band on the planet, the band requires something more to distinguish itself from the pack. Unfortunately, they don’t. I’m afraid the only thing they’ve got going is Seth’s (Seth is better known for his work in BEHEMOTH) interesting guitar work. Most of the songs, though played by accomplished musicians, are not written well. Everything seems incongruous with everything else. From the overlong introductory riff of the first song, to the ending riff of the last song, the songs sound like segments glued together. Bear in mind that this is not an unenjoyable record, but it is a tepid one. www.nomad-band.com, www.animate-records.com