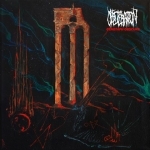 Mother Nature gave Scandinavian Peninsula a brazen and awe inspiring landscape and atmosphere which is equally engrossing and merciless. Among them the Norwegian territory might have something gnarly, inhuman and also mysterious substances from the unheard off constellations during its creation at the very beginning of earth. Their prehistoric civilizations always have their great contribution to human civilizations through surviving and embracing the extremity of Mother Nature, seafaring explorations, art and crafts, Viking legends and myths. Travel back in time and experiencing ancient Nordic sounds from the past could be as mysterious as thinking about the eruption of abyssal music in the form of DARKTHRONE, MAYHEM, ULVER, THORNS, EMPEROR, SATYRICON, IMMORTAL, BURZUM and AURA NOIR in the late 80s and after 90s period. Norwegian Black Metal and its culture overshadowed its Death Metal offerings over the last 20 decades while the first five years of the second wave of Black Metal had more activity than the country’s entire Death Metal history. Even so, the genre of Death Metal didn’t bow completely to its misanthropic ideals, corpse paint, low-fi production values; it was always there like lurking in the shadows in form of DARKTHRONE (old era), CADAVER, VOMIT, OLD FUNERAL, AMPUTATION, KVIKKSOLVGUTTENE and MOLESTED. And it’s still there and carrying forth the deadly legacy in re-energized and envisioned forms of OBLITERATION, REPTILIAN, EXECRATION, DISKORD and GOUGE. OBLITERATION started their death-defying journey from Kolbotn, Norway in 2001. They initially started as a dark Punk band, when they were 13 – 14 years old. Since then they played music with the same line-up: Kristian (drums), Didrik (bass), Arild Torp (guitar) and Sindre as vocals and now live guitar. Since their association they released demo, 7", split, EPs and three full lengths which imprinted their presence into the decaying underground and became an aurora of Norwegian Death Metal renaissance. “Cenotaph Obscure” is their fourth album following their now classic “Nekropsalms” (2009) and the forever upsetting “Black Death Horizon” (2013). “Cenotaph Obscure” was recorded in Studio Cobra, Stockholm with Martin "Konie" Ehrencrona at the helm and released in co-operation with Indie Recordings. While reading some early interviews, in one place front warrior Sindre Solem described their sound as – "We include lots of Punk, Crust, Thrash, Doom and Black Metal into our Death Metal mix, and just keep it going with our little twisted chants of death". Without any doubt over the years the mind jolting sound of OBLITERATION reflects that. If “Black Death Horizon” means wandering into the abyssal horizons than “Cenotaph Obscure” means stepping into charnel pains only to experience damnation and detestation rites of eldritch summoning. In their new creation you will get drowned into a sea of horrid doom and gruesome death which is obscure, ominous and unpredictable and will repeatedly makes you wondering about your tiny existence. The transitions and movements through ‘Tumulus Of Ancient Bones’ to ‘Eldritch Summoning’, then the spine chilling ‘Detestation Rite’ to ‘Onto Damnation’ will only make you keep lingering like a possessed soul on their voracious ‘Charnel Plains’. OBLITERATION is masters at their craft, lending the album a warm and organic yet face-melting production which gave the perfect medium of experiencing their music while its lyrics deal with dystopia, antediluvian rites, summoning of extinct civilizations and journey to inter-dimensional portals through their self visional sonic landscape. With roaring and tormenting guitars, raging drums that herald the impending doom eventually brought into the song by dark, menacing and rotten vocals. The ever flowing twisted harmonies and its primitive melodies binds the overall atmosphere like an engrossing grip which exhibits the young quartet’s aptitude for constructing their songs in such a way that the tension gradually builds until at a moment’s notice, a upheaval of hysterical and possessed riffing erupts and sweeps away everything in proximity. This potent energy the band captured into every single moment of their music is to assailing you with Death Metal as ruthless and primitive as it is invigorating. The album artworks by RKV perfectly visualized the coldblooded obscurity OBLITERATION tried to encapsulate in this record. With “Cenotaph Obscure”, OBLITERATION further expands their journey with mind bending twists and turns while staying on their trademark sound. If old school Death Metal, which harks back to the golden era of late 80s / early 90s, always gets your mind flowing and blood rushing then walk through this cenotaph obscure and let it consume you. Discover more about the band at www.facebook.com/obliterationofficial and visit their label page: www.indierecordings.no