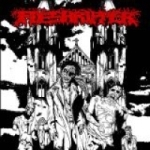 From the hands of Germany’s specialized label for underground Death Metal we receive a split between two German bands of pure brutality. The first half is occupied by FLESHRIPPER, a trio influenced by the most old-schoolish Death / Grind, just like MORTICIAN, IMPETIGO, DEAD INFECTION or even DEPRESSION (with which they released a split EP before), taking distance from the usual froggy brutal Death scene. Low tunes, a lot of speed and low grunts, which by the way are done by the drummer (and I can tell you he does it fucking well, as I’ve seen them two times live). But no technical eccentricities here nor too much originality, they have their style quite clear and defined, and they don’t want to move from there, but I think that anyone who likes the bands I mentioned before will make a good discover with these three guys. The production is not bad, better than on their EP, and just fitting their music. And I liked the cover a lot, a black and white drawing that fits them perfectly, with some zombies standing before a cathedral. On the other side of the ring we find OBLITERATION, a trio too, who claim to be influenced by old CANNIBAL CORPSE, SUFFOCATION and BROKEN HOPE, so I don’t think I need to define the music they play. In this case, they reunite two recordings here, one is a demo that was released on CD-R in 99 and the other a tape released in 95, so sound quality and style are a bit different. The first one is without any doubt the most interesting, with a better production (although it is not so good) and more agressive and technical, with a brutal but quite simple and straight drumming (which by the way sounds a bit poor), and a gutural growler, but in the Chris Barnes style, no frogstyle shouting here too. The guitar side is not bad at all too, but they are a bit in the back because of the production. The four other tracks have a worse production, lower, but more or less the same style, although the vocals sound lower and more stomachal. What I found pathetic is that they got their cover censored (a gory photo, but not at all the worst one I’ve seen here and there) and that the label had to put it inside on a different page. To sum it up, more than an hour of old school Death / Grind for the ones bored by froggy-style vocals and top-brutality at highest speed. www.suffer-prod.de.vu