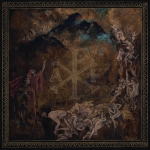 These years are for sure a time for bands with secretive members. PAKKT is yet a band where we aren’t informed about how many members there are in the band, who plays what and so on. Back in the good old days, musicians used aliases and often, quite soon, revealed who they were anyways, as it wasn’t much fun to be a Rock’n’Roll star in the shadows. Things changed a tad with Black Metal and especially the second wave, as they didn’t set out to be rockstars, though the antidote to fame and popular music. But again, secrets didn’t last long, mostly due to persecutions by the police, haha. Nowadays Black Metal has pretty much been commercialized and all the secretive bands seem to enjoy their fame, in the shadows, the world works in wonders. PAKKT is, perhaps, a new entity from Germany, this album is at least their debut full length and as far as I can figure out, the only thing they officially have released. Even though the band hails from Germany, they would rather have been born and raised in Norway, judging from the sound of “To Brocken Heights Where Witches Dance”. There has been a healthy revival of second wave of Black Metal sounding bands in the later years, or did the style just never die? Riffing-wise we go from THORNS at times, then you suddenly think of DARKTHRONE, then come moments of obscure raw brutality where you think of GORGOROTH, then the atmosphere of DØDHEIMSGARD, just before they went DHG. That is all intertwined in a brutal and dark overall atmosphere with some good melodic moments, some well placed samples and even more obscurity that makes me think of NECROPHAGIA and so it continues. A fucked up eerie rollercoaster of nostalgia and intensity, I like it! Or to be honest, I came to like it, the first few listens of the album really didn’t catch onto me – though it took revenge, brutal revenge! This is actually a quite good and comforting modern Black Metal release… Solid second wave of Black Metal antics, some Industrial elements, chaos, raw grimness and sheer brutality and a quite thick, yet fitting and organic production, what more can we wish for, here in January? Enter the rite of infernal invocation: https://pakkt.bandcamp.com, www.van-records.com