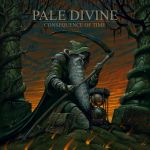 Amongst the great amount of Doom Metal bands from the 90s, PALE DIVINE is one of those that has been following the same path through their 25 years of pure experience in the underground without derailing at all from the road. So, “Consequence Of Time” could be an allegoric title for a clear evolution of their career that detaches itself from the proximity it has with the previous fuzzy stoner sound and that road biker feeling that haunts almost every release, especially in “Thunder Perfect Mind” and “Cemetery Earth”. Instead of that, the band turns the game reducing the distortion knob for a more organic tone, as well as embracing a darker approach with Heavy Metal and 70s US Progressive Rock elements, resulting on a more balanced, fluid and dynamic release in comparison with the aforementioned full lengths. In order not to ruin the experience spoiling every track and be a killjoy this time, I will limit myself to encourage you to dive into this by your own, just giving a general glimpse of what this is all about, because all the songs here are genuine in their own single way within the same package. Former members Greg Diener and Darin McCloskey reach a new level in terms of composition, improving a lot on their playstyle and touch, for example the closed hi-hat resource that brings a new dimension for a constant tempo, or how the soloing overflows with feeling and expression turning out to be something more accord to every song’s context and not something apart to impress with more notes than necessary. Also, the interspersed voices by Greg Diener and the newest member, Dana Ortt from BEELZEFUZZ, help to keep the interest through the 42 minutes, without falling into monotony and predictability as it is an usual finding on an overexploited genre as Doom Metal. Important to mention that behind the isolation glass, Richard Whittaker was highly responsible for achieving this astonishing production, and after being involved on the latest works of SOLSTICE, LORD VICAR and ORCHID, this release follows a similar colour sonically. Another remarkable aspect are the lyrics, which are based on the Christian imagery contrasting darkness and light as pathways to reach eternity from a metaphoric and personal point of view, but yet some passages lead to think about TROUBLE on that oppressive and deterministic written fate. In conclusion, the more uncommon or even strangest aspect of “Consequence Of Time”, comes with the fact that PALE DIVINE dared after many years and a consolidated path, to break loose on their formula and comfort zone, a fact that usually doesn’t happen as we know of bands with decades of career who decide to try something else and succeed after all… As a consequence of time, this consequence is more fascinating and surprising than expected, a real triumph for worshipers of Doom who are still eager for something refreshing in the genre. Highlights: ‘Tyrants & Pawns (Easy Prey)’, ‘Consequence Of Time’ and ‘No Escape’. More info at: www.facebook.com/serpentspath, www.facebook.com/cruzdelsurmusic