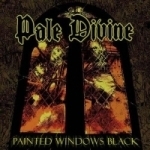 Pennsylvanian Doomsters PALE DIVINE have been there in the world of Doom Metal quite a long time already. The band was formed in 1995, and since then they have released 4 full-lengths thus far off which their latest one carries the name "Painted Windows Black". This very album in question features nearly 70 minutes of 70s tinged Doom / Heavy Metal that harks back to the times when the kind of sound what PALE DIVINE carry out on their latest opus, sounded almost virginal – thanks to bands like BLACK SABBATH and PENTAGRAM for coming out from their cellars and creating something new, something unheard yet bombastic back in those days. On PALE DIVINE’s 4th album – the spirit, the vibe and the feeling of those "virginal days" of Doom Metal, is greatly present through the entire album, which they obviously will get tons of credit for among the fans of Doom Metal fans. There’s just no question about that. There’s this magick of the old days finely been captured into the songs on "Painted Windows Black"; meaty riffs, jamming fat bass sound, Tony Iommi type of dazed and tantalizing solo work, Greg Diener’s sort of dramatic vocalism that goes under one’s skin somewhat easily even – and all this make it nearly impossible to resist an album like this. There’s much in them that remind us of the yesteryears of early Doom Metal; those golden past times when something extraordinary great was about to born, which would have had a deep influence for further generations to come. That’s what "Painted Windows Black" offers basically from start to finish; some of the most nostalgic and warmest recollections ripped out from the earliest sounds of Doom Metal – and there’s no way that you could not love the record due to the aforementioned reasons. PALE DIVINE have it all to please the entire Doom Metal world, as this very record proves it so loud and clear. More at: www.facebook.com/pages/pale-divine/124093500958716, label: www.shadowkingdomrecords.com