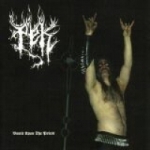 The Polish have a distinguished history in the Metal world. PEK is but one of the latest additions to that history, and their much discussed debut, "Preaching Evil", released on Nuclear War Now! Productions is sure to help continue it. "Vomit Upon The Priest" is the band’s third demo released initially in 2006, but pressed to cassette in 2007. As you may expect from the title, the band’s music is a Black / Death hybrid, with a deeply held bias to the latter. Their songs are as brutal as they come, complete with burning guitar tones, and rapid-fire blastbeats. The one thing that works against the cassette is the tones are sometimes overdone, making it hard to hear what exactly is going on. But its a small grievance, and as the tape plays on, its almost forgotten. Be on the look out for PEK. http://users.telenet.be/noc/pek/pek.htm