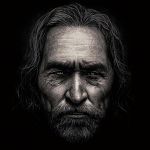 With PÉNITENCE ONIRIQUE, we have another fine example of the nearly vast French Black Metal scene. The band hails from Chartres in the region Centre-Val de Loire and started in 2015 as a one man project of mastermind Bellovesos. With the addition of singer and lyricist Diviciacos, the duo released the first album “V.I.T.R.I.O.L.” a year later and an exclusive digital single on their Bandcamp site. Last year, they turned into a full band and as a result released their second album “Vestige” now, of course on the fantastic premier French Black Metal label Les Acteurs De L’Ombre Productions. What does PÉNITENCE ONIRIQUE have to offer on “Vestige”? Well, some very elaborate Black Metal of the atmospheric kind, full of monolithic parts and extensive harmonies, led by both keyboards and guitars. Yet the songs are neither softened or avantgarde, as they are thoroughly rooted in Black Metal. The harmonies of the keyboards, as well as the acoustic guitars in the intro pieces, underline the often a little esoteric atmospheres of the songs. They are the antithesis to some rough and fast, pretty pure parts and the mainly sharp, pretty typical Black Metal vocals as well. But PÉNITENCE ONIRIQUE never lose the perspective on the album, since they create a total picture that fits in its entirety. The first three, quite long songs ‘Le Corps Gelé De Lyse’, ‘La Cité Des Larmes’ and ‘Les Sirènes Misérables’ are a fluent stream before the shorter restful instrumental ‘Hespéros’ calms the listener before the storm. The final three songs ‘Extase Exquise’, ‘Souveraineté Suprême’ and the closing title track pick up the style of the first three songs again. Maybe these three are a little less on the epic side, except for ‘Vestige’ itself. The titletrack ends the album with fury and epic, leaving me longing for a restart of the album. As I do so, I encourage you to visit PÉNITENCE ONIRIQUE at www.facebook.com/penitenceonirique or their dedicated label at www.lesacteursdelombre.net