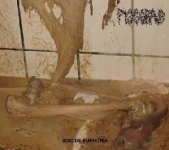 I bet Dark Descent Records is vexed that this debut from PISSGRAVE escaped their grasp, being that “Suicide Euphoria” is an imposing Death Metal juggernaut. Filthy and venomous, this album sounds like it was created by psychotic fuckers who would gouge out someone’s eyes for fun if they could get away with it. The gag reflex-inducing cover art is a fitting representation of the obscenity to follow. PISSGRAVE are easily more evil than most Black Metal and more suffocating than most contemporary Death Metal. And usually, effects on vocals are a turn-off for me, but here they add to the forcefully oppressive vibe. The singing literally sounds like the mic is shoved down the guy’s throat. While there was one track I didn’t care for (‘The Second Sorrowful Mystery’), “Suicide Euphoria” stands near the top of my year-end list in our rapidly diminishing 2015. Find out more at: https://profoundlorerecords.bandcamp.com/album/suicide-euphoria