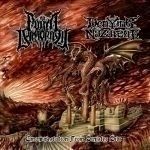 The Chileans of PORTA DAEMONIUM have been dwelling around since 1998 with a different name, and they released their debut album back in 2016. This split continues what they have been doing, high speed Death Metal in the lines of DEICIDE, SUFFOCATION, IMMOLATION and early MORBID ANGEL. Their 3 songs of this split are brutal and fast Metal of Death with a couple of dissonant chords here and there. They do have a lot of sound of the angels of morbidity in the Tucker- era, and their overall aura possessed that suffocating atmosphere that it is almos trance inducting. In the same style, although with a bit different approach, comes their country mates DENYING NAZARENE. They were formed in 2003 and already have released a couple of albums. Their style has more Thrash elements in the early KREATOR vein, coming closer to the MALEVOLENT CREATION style, but also with many touches of MORBID ANGEL. This split is essential if you are a fan of the style and MORBID ANGEL heritors in general. To me, I do prefer a bit more the DENYING NAZARENE side, and I also urge to check out their past material. Yes, right now after at least 3 decades of extreme Metal dwelling this rotten earth, there are still bands that raise the flag high. Do not expect something original, those times are gone and maybe we do not need them. We only need more demon seed of high quality, and oh yes, here it is! More info at: www.facebook.com/portadaemonium666, https://denyingnazarene.bandcamp.com, www.facebook.com/ibdc666

Julián “The Voice Of Exiled” Núñez

Julián "The Voice Of Exiled" Núñez