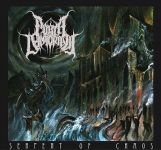 Formed in 2011 in Santiago, Chile, PORTA DAEMONIUM had released some singles, rehearsals and the 2 track "Demo MMXVI". But it was not until mid 2016 that they teamed up with Iron, Blood And Death Corporation to put out their debut full length, "Serpent Of Chaos". Carrying such a title, it is no surprise that this album is comprised of 27 minutes and 46 seconds of absolute madness! And the magnificent cover artwork adds nicely to the whole concept. First off, the sound is raw, leaning into the dirtier South American trademark style with some (odd, I know) NYDM influences (think early INCANTATION) here and there. Also, the mix is organic and a little muddy, but it fits perfectly their style of music. The drum sound comes across really punchy and the guitar tone (since it seems the bass guitar us buried in the mix) reminded me immediately of some of the early "War Metal" bands such as BESTIAL WARLUST and BLASPHEMY up to an extent. There are some mid paced segments, but most of "Serpent Of Chaos" focuses on fast paced patterns and blast beats. And maybe this is one of the things they could improve. The riffing gets really messy when the band is pummeling on at full speed. And that makes the guitars sound sloppy, like if they were just playing fast for the sake of it. And the vocals are deep and haunting, with a lot of character. Although the album is a total juggernaut, these 30 minutes go by so fast that I found myself pushing that "repeat all" button more than once. Well, truth be told, I really dig this chaotic (no pun intended) style of music and PORTA DAEMONIUM delivers much more of what I was expecting. I am already looking forward to their new material. At this point, they can only get better. Totally recommended! Show your support and contact the band here: www.facebook.com/portadaemonium666. And get the album from their label here: www.facebook.com/ibdc666