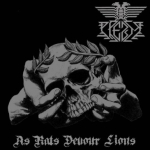 Black Metal from the United States Of America is well-known for solo projects, but this time it is a real band consisting of five members. All of them have already played in other outfits (too many to be named here) and that may explain why the music is on such a high level. High regarding aspects like sound, songwriting, instrumental skills and tightness. If someone would have told me the eight tracks are from a rather well-known act like MARDUK or DARK FUNERAL I simply would have believed that. PREZIR are playing that very special Swedish inspired Black Metal with lots of blast beats and double bass at a spanking pace. During the high-speed parts the listeners are served that typical tremolo riffing, but when the tempo is lowered the guitars are unfolding some enjoyable and gratifying riffs remembering of UNANIMATED, DISSECTION or NAGLFAR. The vocals are some in-between of shrieking and gargling, I guess some listeners may not like that style, although the vocalist is really good at providing some variety and avoiding an one-dimensional performance. As the band is completely focused on the music keyboards, movie samples, female vocals or other gimmicks are missing although an instrumental interlude would have ensured a bit variety. Both tracks ‘Dar Al-Harby’ and ‘Serpents In The House Of Ra’ have been released last year on the EP "Contempt", which is by the way the English translation for the Serbo-Croatian band name. For more info visit: www.facebook.com/prezir, www.godzovwar.com