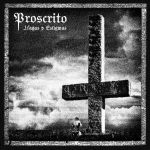 Each time I visit the Memento Mori roster, and see the names ECTOPLASMA, WOMBRIPPER, VULTUR, VALGRIND, UNCOFFINED, SOULROT, RUIN, RAVENOUS DEATH, PYRE, MORBO, INFAMOVS, FUNEST, FUNERALOPOLIS, COFFIN CURSE, CARDIAC ARREST, CARCINOID or BURIAL, it’s a total reign of Death and Doom. And the most fascinating fact, that almost all of the acts under this revered Spanish label, just began their journey on this everlasting path of Death and Doom and label owner Rául Sampedro certainly must have a spirited eye to discover all these acts from the depth of the underground. PROSCRITO seems like becoming another gem unearthed in this process and this Death Metal trio from Catalonia just spits out their debut album “Llagas Y Estigmas” (in English: “Sores And Stigmata”) after having released an EP called “El Calvario” in 2017. With initial listening to the record over and over again, this question will be evoked: is this a Doom album with Death orientations or a Death old style album with Doom influence? As the sound is very heavy, inheriting from doom and the long length of the tracks which breeds dark and ancestral sounds, more leaning towards the Swedish Doom rather than the British one. Death, on the other hand, intervenes in the rotten part of the tracks, with wild sounds, mixed in a deadly manner. The choice to write the lyrics in Spanish, perfectly connected with the compositions, emphasizing the atmosphere of hideous and macabre evoked by the band which might have been inspired by the bloodthirsty literature of Robert E. Howard and Cormac McCarthy. Javi Félez (Moontower Studios) took care of the recording, mixing and mastering, and created something that sounds brutal and oppressive (as old school Doom / Death Metal must be) with the modern aesthetics which allows the instrumental to be graspable for the listeners. This Spanish trio is a fanatical follower from the classic ideas of the genre, and on this debut they proficiently mixed the two genres in a pitch-black and equally dense combination which can be profoundly heard on tracks like ‘Exequias’ and ‘Marcado Por La Pezuña’. “Llagas Y Estigmas”, certainly needs patient listens to discover the hidden pearls in this treasure. Followers of CIANIDE, HELLHAMMER / CELTIC FROST, SAINT VITUS, CANDLEMASS, NECRO SCHIZMA, THE OBSESSED, ASPHYX, AUTOPSY, WITCHFINDER GENERAL, PARADISE LOST, WINTER, SAMAEL and GOATLORD shall expose to this debut release and experience the dreaded vision and creativity of the Spaniards. Find more about them at www.facebook.com/proscritoyolvidado and visit the label page at www.memento-mori.es.