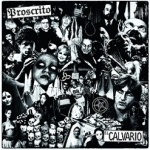 PROSCRITO is the name of a new three members Doom / Death act coming from Spain and “El Calvario” is their first production, a 5 tracks EP released by Iron Bonehead. First of all, the band is not a Doom / Death act in my opinion, as the label mentions on their site. Their sound and style is more in the Sludge / Doom genre. The only thing that sounds something close to Death Metal is the vocals. The first track, titled as ‘Via Crucis’, is an instrumental one. Slow, monotonous and ritualistic, it offers the typical simple riffing, distorted bass and a big load of cymbals (I really hate that resource). You can hear some woman whining and cries too. ‘Anuda La Soga’, the second track, offers no new elements to everything you hear in the first track, with the exception of the vocals. Some faster section can be heard after the third minute. ‘Ceremonia De Los Penitentes’, track number three, offers the same elements of the previous tracks. The last track, an instrumental, is the most interesting one, charged with the best riffing on the whole EP. Everything is sung in the Spanish language. You can hear some CELTIC FROST influences here and there. The main problem with this kind of stuff is that it tends to be monotonous as hell and the music becomes just an awful repetitive exercise with no peak or climax. Music is, in my humble opinion, about tension and release. And yes, I can understand bands that try to rebel to this kind of “rules”. Sometimes it works, sometimes not. Well, as you noticed, I’m not a big fan of this kind of stuff, but if you are, give them a chance. For more information visit https://proscritoyolvidado.bandcamp.com, www.ironbonehead.de