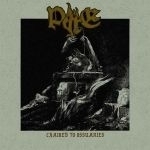 This is the second album from this Russian Death machine, and I must say that they are still on top of their game. This Death Metal is more in the thrashier vein, not far away from early SEPULTURA, MALEVOLENT CREATION and also POSSESSED and KREATOR come to mind. The thing here is that they are very good composers and executioners, this is a riff fest with some morbid melodies, and a very violent Thrash attack that makes it very interesting. What also makes this a bit different is the fact that the production, while sounding very good, is not over produced and way too polished like many other bands in the same style try too hard. It all sounds pure and straight. The vocal delivery is also very good and shows variety, done by the mastermind of the band Mr. Dym Nox, who also handles bass and drums and, I must say, gives a very impressive performance. The guitar work is also quite dynamic, with the riffs sounding like a swarm of killer vultures in for the final attack. At times the overall sound comes near to the sound of early Swedish Death like early GRAVE. There are few moments where the band plays in a slower tempo but they soon turn into the faster pace that the band is really comfortable playing at. I suggest that all those into this kind of evil Metal should look for all their material that they have been releasing since 2011. A great release that will surely age with unholy grace. www.facebook.com/pyredeathmetal, www.memento-mori.es