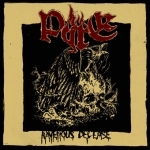 Russian band PYRE attacks on this CD version of the vinyl MLP released by Blood Harvest, and in this digital format you can find a very well done SLAUGHTER cover, done very much in the style of PYRE, which is morbid Death Metal, which recalls bands like early UNLEASHED and more recent bands like KAAMOS and REPUGNANT. Yes, the Swedish Death Metal sound is all around with a very heavy and raw production, which in my ears sounds really good giving the band that edge that only with a good but raw production can be achieved. There is also a strong sense of MASTER influence in the 4 original songs of the band. The band members are also involved in quite a few other bands, in which I can recognize TEITANFYRE, so there is no surprise in finding a bit of Black Metal essence in this Death Metal assault. The heaviness of the guitar is what really shines in this band, and it also possesses that low boom bass sound that makes it cavernous at the same time. For a first recording, it is quite promising, and awaiting their next attack, that will surely kill and destroy. www.facebook.com/pages/pyre/183665955062494, www.assault-crew.net