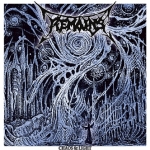 REMAINS is a Death Metal band formed in 2011. The leader of the band was Miguel Angel (vocals and guitars), who was the son of another extreme Metal musician, Miguel Angeles (FOETICIDE, PYPHOMGERTUM) ans also a well known music producer. I was able to meet this once brilliant person when he was actually a child. It was sad to hear that such a tremendous talent left this world in December 2019. Yet, this is his last masterpiece. And I must say, that the son surpassed the father. Something I am sure the father is very proud of. This is the fourth album of the band and I must say, the best one. I was already surprised by the quality of their other releases, of pure Death Metal with a very good dose of the old school Swedish sound in the DISMEMBER, CARNAGE and UNLEASHED area. Well, this last album has that very same elements although injected with steroids to sound even more deadly. As a matter of fact sometimes it reminds me if EDGE OF SANITY went berserk. They have that eerie melodies that hook you like awaiting in the slaughterhouse. Just listen to the main riff in the song ‘Souls Burner’. And then every song while remaining in the same style and aura, has a very different essence. I would say that there are bits of IMMOLATION and early MORBID ANGEL too, which makes them different from those bands just tying to make their guitars scream their HM-2 pedal to the max, besides that their composition skills are very good. Not only I make the call for all respected Death Metallers to check this album, but also their previous works, which are on the same level, and give a try to the many other projects Miguel was involved in, like ANOXIA, DARKCREED or FRACTAL ENTROPY. Miguel gracias por tu arte extremo, while your guitar sounds in somebody’s speaker not even death will die! More information at: www.facebook.com/remainsdeathmetal, www.facebook.com/matrecordsmx