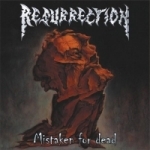 What the fucking hell!?! Honestly spoken the current trend of reunions really causes a wave of old bands returning in a strange way, but for a lot of them it’s obviously very hard to catch up with the feeling of the old days again. I’ve still had RESURRECTION’s debut “Embalmed Existence” in my mind as a really solid Florida Death Metal album that offered all elements which you’d expect from a band of that region back then. Besides this there were those crazy storyteller intros that simply could be considered as pure cult. Anyway throwing “Mistaken For Dead” into my audio all forms of sceptisism were blown away. Holy shit, RESURRECTION’s sound still symbolizes the bloody hunger of a wolfpack. Expect a high energy level and forget about the latest works of OBITUARY or SIX FEET UNDER. Compared to tracks like ‘Coward’ or ‘Death By Desire’ those seniors sound like Florida’s nursing home band. If you like the groovy and totally riff- and doublebass massacre based style of 90s Florida Death Metal then “Mistaken For Dead” is more than just a reminder of good old times. Ok, the vocals of Paul DeGolyer aren’t that low grunted anymore like in the 90s and the production don’t has that meaty brutality like the old Morrisound recordings, but anyway there’s still a lot of aggression and coolness left that gives “Mistaken For Dead” the mark of a real deadbanger and a more than just respected return of RESURRECTION! www.myspace.com/resurrectionfl