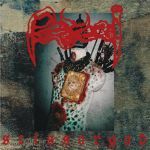 After their exceptional Black Metal debut in 2011, “Nocturne Eyes And Teeth”, which was full of venom and old school, energetic playing; REVEAL! congregated a fan-base who was then left shaken and disturbed, when they released their second album, “Flystrips”, in 2016. It was even challenging the most exploratory listeners, as they delivered an album that encompassed very unusual themes and sounds, yet one with an even darker underlying aura than the debut. On the second album, they lowered down their tone and definitely showed how to unleash tremendous aggression in a particularly corrosive atmosphere, and that arrogant attitude between Punk and Rock’n’Roll and, of course, they continue to pour acid upon the established norms and standards. After these releases, it became clear that REVEAL! is an entity of its own kind; that mutates transitions and twists on itself, an entity from which you should always expect eye-opener revelation. And with their third coming, “Scissorgod” they captured something bizarre and damaging where the Swedes take their artistic creation to an even darker and more insane direction. This record begins with the mysterious ‘Scissorgod’; that combines tremendously strange and almost environmental parts with astonishing melodies. ‘Harder Harder’ appeared with that punkish mood but quickly dispersed into gripping melodies, while ‘Decomposer’, will make you feel slightly nauseous, even though it is kept in a horror drenched atmosphere. ‘Down Through The Hole’ spirals you into a whirlwind of fierce Black Metal with estranged Post Punk aura and moments of synthesizers and noise mixing. ‘Clevermouth’ (of which a music video was also released beforehand), giving all the listeners utmost taste of its wholesome filth. This is a record with key elements, repetitive guitar riffs that act like a mantra and the voices, on the other hand, seem to be emitted by a deranged total. That helps to create a very disturbing and sinister environment. All these morbid elements, reappearance, voices, the effective use of wind instruments; further twistes the atmosphere of the album and makes it more unpleasant and take it to the maximum to create the most macabre experience possible. The whole record has the bass put in the front all the time, thanks to a production that is not just do it yourself for the sake of it, but much more powerful, lighter and more refined; commissioned by none other than, Martin “Konie” Ehrenkrona (IN SOLITUDE, HENRIK PALM, PIG EYES, NIFELHEIM), recorded and mixed in the Cobra Studios, Stockholm. The result is obviously a fantastic recording that gives you the feeling that REVEAL! is playing live in your surroundings. No doubt, the Uppsala based quartet REVEAL! moved towards the outer fringes of extreme Metal and beyond with this release and I have read somewhere that “they collect and inhale the madness of the world and channel it in their music”. And the truth is, in a rotten, crazy world they have created a work that will be better enjoyed if it is explored in different states of consciousness. More about the band at www.facebook.com/revealswe, or visit their label page: www.sepulchralvoice.de.