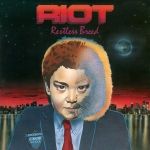 How difficult the musical career of a classic band can be… The history of RIOT says it all. RIOT’s career is full of obstacles and with that roller coaster of going through all kinds of survival tests, they were never considered a top band. But that’s merely a one sided tale by the press. Magic and intensity are actual the reputation and repertoire of RIOT. And that primarily led by Guy Speranza. The unique vocal approach of Guy for RIOT is the same as Bon Scott for AC/DC and Rob Halford for JUDAS PRIEST. Although revered highly and much loved by RIOT fans, his march smelled of tragedy. Then the period of Rhett Forrester changed the band’s style, attitude and introduced a different dynamic of the band. Rhett has that charisma and swagger, and was a much more Blues based singer than Guy. This produced more spark and sparkle, and surely differed “Restless Breed” from the sound of the previous “Fire Down Under” and earlier records. So, in many ways this disc was actually the beginning of a new sound for RIOT. They were progressing towards a NWOBHM sound and quite a few of the tracks sound in the vein of that movement. The disc starts with ‘Hard Lovin ‘Man’, a simple and straightforward song that serves as a cover letter. ‘CIA’ and its very effective chorus, transpires the street spirit and the most typical grape of the best RIOT. The essence is Hard Rock, but the work of the rhythmic riff hardens the theme and gives it a Heavy Metal coverage. The title track ‘Restless Breed’ comes with a great chorus and has that essence of the seventies and the magic of the big names. For the second time in RIOT’s recording career they did a cover version on a record. They did STEPPENWOLF’s ‘Born To Be Wild’ on “Narita” and now it was the lesser known ‘When I Was Young’, which had been originally recorded by ERIC BURDON AND THE ANIMALS. Then comes the ‘Loanshark’ with an explosive high tempo, that you will find the need to crank up the volume. The technical touch on the drums and with the first riffs of authentic Heavy Metal, it’s a prelude to what would come several years later. With Reale and company you always have to expect a song of pure Rock and that is ‘Loved By You’. ‘Showdown’ shows that Forrester can slow it down and still sound great. It is the ballad of the album, which has a lot to do with LED ZEPPELIN. With high quality guitar work, it’s one of the best ballads of the eighties and was a massive radio hit (even with a major recording glitch!). Not only does Reale shine everywhere, Mr. Ventura also shines with its own light in the pungent theme ‘Dream Away’. They close the work with ‘Violent Crimes’, the most powerful and Metal theme of the entire record. With all these, “Restless Breed” is certainly one of those killer discs from the early 80s that often gets overlooked and by many standards, “Restless Breed” is their best album with loads of good melodic stuffs and also by being heavy in places. Rhett Forrester shows that he is one hell of a front man on this disc, and Mark Reale’s awesome playing shows that he is one very under rated guitar player. The band showed everyone how much energy they possess and will remind all old faithful RIOT followers, how fantastic they were with Rhett, who deserves better than just being seen as a humble replacement of Guy. So, old guards and inquisitive followers may discover RIOT in totally other scopes, as this special deluxe collector’s edition re-issue comes with fully remastered audio, enhanced artwork with unpublished photos and retrospective interviews with founding members. Explore more about the band and label here: www.facebook.com/riotrockcity, www.facebook.com/rockcandyrecords.